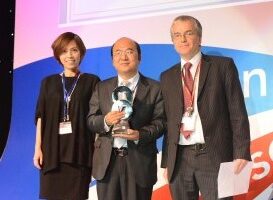 Joint Winner of the Chinese Investor of the Year Award

Founded in 1976, Bosideng’s unwavering commitment to quality and innovation has led the company to become the leading down apparel brand in China.

On 26th July 2012, the day before the London Olympic Games, Bosideng UK opened its first UK flagship store in London’s West End showcasing its European menswear collection. “We chose the UK as a foothold to Europe, which is our key overseas market”, states Bosideng UK’s CEO, Wayne Zhu. “Bosideng has been partnered with a British company for years in order to study the market potential, consumption patterns, competitive brands and establish its own team. Due to this, we know the UK better than any other market and London being one of the world’s fashion hotspots is a major advantage for the brand.

The UK’s local resources, design expertise, manufacturing and marketing are key to the company’s global expansion.

1. Why did you enter the British Business Awards 2012?

The British Business Awards are extremely prestigious, and recognition from the British Chamber of Commerce in China is significant both in China and the UK, particularly in the early stages of Bosideng’s expansion.

2. What were you hoping to get out of it?

Bosideng’s expansion into Europe through its flagship store in the UK has been a major development for the brand and leads the way for other Chinese companies. Recognition through the British Business Awards, in the category of Chinese Investor of the Year, has helped position Bosideng as a leader, particularly in the clothing retail sector. We hope that it will also increase the recognition and appeal of Bosideng in the UK market.

3. What have you learnt about your business by entering?

When you are working on a project such as this, it is easy to focus on what’s required at the time to make it a success. We have learnt that the growth and expansion of Bosideng into the UK is much more significant in terms of the retail sector and UK-Chinese business relations, as this type of move has not happened before in this sector.

4. What does winning the British Business Awards 2012 mean to you?

Due to the prestige of the award, it is of course very important to Bosideng. We are honoured to have received such an award in recognition of the brand’s growth and its support of UK-China business relations.

5. How will it affect, if at all, the way that you do business in the UK in the future?

Bosideng’s move to the UK has been a major investment, and that includes investment in staff. The award will not necessarily change the way that we will do business, but it does suggest that we’re doing things right and that we should progress and develop in the same way.

6. No company has ever successfully defended their BBA title. Does it inspire you to be the first?

Of course it would be fantastic to break the trend and win two successive British Business Awards. We are looking forward to a strong year ahead developing the brand in the UK, and we hope that this will lead to success in the next edition of the awards.