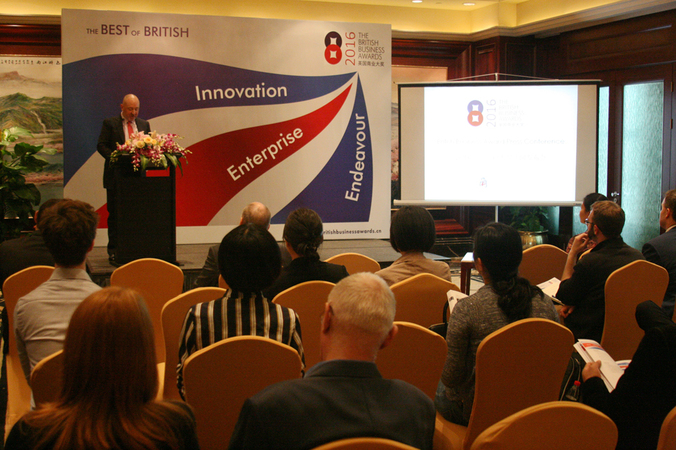 On 14 April, the British Chamber of Commerce Shanghai announced the launch of the 2016 British Business Awards at InterContinental Shanghai Ruijin.

British Consul-General Shanghai, John Edwards, and Chairman of the British Chamber of Commerce Shanghai who is also the Chairman and Head Judge of the 2016 British Business Awards, Barry Piper, attended and made keynote speeches about the Awards.

The British Business Awards (BBA) was established in 2008, held every two years and has developed into a key event recognising and promoting excellence in innovation, enterprise and endeavor in the British business community in China. Past winners include BP, GKN, InterContinental Hotels Group, Jaguar Land Rover, Standard Chartered, Unilever, Virgin Atlantic and many others. VIPs such as Sir Sebastian Wood, then Her Majesty’s Ambassador to the People’s Republic of China; His Royal Highness Prince Andrew, Duke of York; Sir Roger Carr, then President of the Confederation of British Industry has also participated.

I am delighted to be a Patron for the 2016 British Business Awards. Following the visit of President Xi Jinping to the UK last October, we have the potential to build a genuinely golden era in relations between China and the UK. British business will be at the heart – helping to power the UK’s own growth by seizing the opportunities here, of course, but also working with China to upgrade its economic model. British innovation and creativity. British brands and professional expertise. British excellence in education and science, creating tens of thousands of new Chinese “ambassadors” for the UK every year. British openness to Chinese investment. We have a huge amount to celebrate. These awards do exactly that.  – Patron of the 2016 British Business Awards, Barbara Woodward, Her Majesty’s Ambassador to the People’s Republic of China

Through eight award categories the awards aim to celebrate and recognise enterprises that have made outstanding contributions in business and cultural exchanges between China and the UK. Below are the award categories:

Applications for the British Business Awards are accepted from April through to July. All applications are applied through the official website www.britishbusinessawards.org. Judges will review applications, select five finalists for each award category and will be announced at the finalist announcement event. Interviews will be conducted in the month of September and the final award winners will be announced at the Gala Awards Dinner held on 10 November, 2016 in Shanghai.